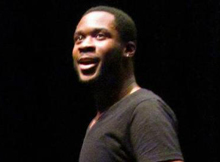 Newark Symphony Hall Special Ensemble was chosen to perform at the NJ Nets Game on December 16, 2010. With hard work they gave it all they had and was excited… Read more »

After the Newark Symphony Hall Special Ensemble’s Performance at the McDonald’s Gospelfest 2011 they were invited to the City Coucil Meeting to perform. As stated in the video they were… Read more »

"The Blood" at Ordained Praise Concert